Posted on November 14, 2012 by bakingnotwriting 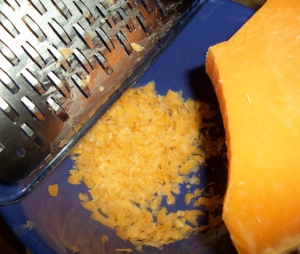 OK, to be literal, it’s penne and mimolette, but there are parts of New Jersey where they call all pasta “macaroni” and red sauce “gravy.” Jersey Strong!

I don’t eat much cheese since I don’t tolerate the lactose, and even hard, aged cheeses (which apparently have lost their lactose over time), don’t usually work for me anyway. Mimolette may be the exception. Either that or it’s so delicious (and beautiful — see above) that I just plain don’t care!

Mimolette is one of those cheeses they only make in France. This particular one is from Isigny Ste. Mere, a Norman cheese maker. You should be able to find it at Whole Foods. If not, you can Tweet their US representative (he loves him some Twitter) at @IsignyAmerica.

Full disclosure: I was recently hired to be part of a team that was promoting the Cheeses of France to the American market. I bought this hunk of mimolette (among other things) at our event and I have been hoarding it in my fridge ever since. I converted the weight (.210 kg) and the slice I used for this recipe was just under half a pound.

Mimolette looks like cheddar (it’s actually a more brilliant, vibrant orange) but it tastes like no other cheese in the world. It’s nutty and tangy and smooth and sweet. I recently made a gratin with whole lactose-free milk, ordinary baking potatoes, mimolette, and olive oil and it was the best gratin I have ever tasted. Ever. Unlike most cheeses, mimolette has such a range of flavors that you don’t need to use more than one type of cheese as you normally would. Because it bakes and ages so well, you will hear it compared to gruyere. I find it to be a more subtle flavor than gruyere which can taste a bit aggressive to my palate.

10 ounces of penne or other pasta
8 ounces of mimolette, grated
2 cups milk (I used 1% lactose-free because that’s what I have in the fridge)
2 tablespoons Earth Balance plus one more for the topping
2 tablespoons flour
2/3 cup Panko or other bread crumbs
salt and white pepper to taste

Boil the pasta for about one minute less than the box or bag recommends. You are going to bake it after and you don’t want it going mushy on you. 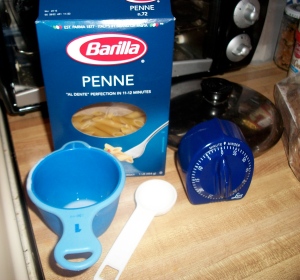 While the pasta is cooking, grate your cheese. I use a microplane and I love it! Apparently, this used to be an industrial tool of some kind till someone discovered by accident it was an excellent way to grate cheeses and other hard foods.

Once the pasta is draining in the sink (and drain it well — watery pasta is a pet peeve of mine!), melt those 2 tablespoons of Earth Balance in that same saucepan. Use a reduced heat (assuming you were boiling on high) and add the flour, pepper, and salt, and blend well. Add milk and use a whisk to get it smooth if necessary. Add your grated cheese, reserving a couple of tablespoons to melt on top, if desired. Make sure the cheese is mostly melted before folding in the cooked, and drained, pasta.

Melt that final tablespoon of Earth Balance in a separate pan or a bowl in the microwave (or let’s be honest here — you could use butter) and mix in the Panko crumbs.

Pour the pasta and sauce into an oven-ready casserole dish. Sprinkle Panko mixture on top and top that with the reserved cheese.

Bake for 20 minutes or until brown and bubbly. Serve with a green salad to cut the grease. 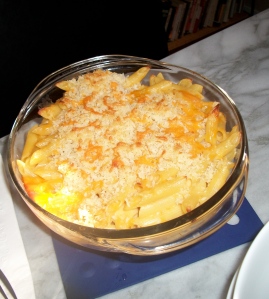 5 Responses to Macaroni and Mimolette