Posted on August 8, 2013 by bakingnotwriting

Our next door neighbor turned 93 this week so of course we baked banana cupcakes with googly eyes. The recipe was a riff on my banana layer cake recipe but I am incapable of making the same thing twice, apparently, so I made a few alterations and my nephew felt that the result was so delicious I should share this version with the world. Or at least that fraction of the world who reads this blog!

Speaking of reading what I write, I finally got through the first draft of the script I have been writing seemingly my entire life. A good friend who is a much better (and more experienced) screenwriter gave me excellent advice to help with the next draft.

Characters. I know, it seems obvious, and moreover, it’s what my best screenwriting teacher used to emphasize. The more you know about your characters the more the plot complications (and humor, in the case of a comedy) will be organic and the better the movie will be. But you get so caught up in the writing of a movie, so preoccupied with plot, jokes, and drama that it’s easy to forget that each character must be a living breathing person with drive and motivation. I saw a movie today that was an example of what can go very wrong when you neglect to create characters. The To Do List, a female-driven (and written and directed) comedy, has a stellar cast of hilarious comic actors. It has a novel, fun concept and a great setting for humor:  a local pool. And it’s one of the least funny movies I have ever seen. The To Do List was so not funny, it was painful to watch. This summer, The Heat proved that a buddy cop movie with women could be hysterical. I’m devastated that The To Do List didn’t do the same for Superbad — or any one of the literally hundreds of “boys trying to lose their virginity movies.”  Instead, it was an  object lesson in how not to write a script.

Preheat your oven to 350 and put cupcake liners in two tins.

Mash the bananas and then beat them till smooth. We used our new immersion blender which is the ideal too for this type of job and also super easy-to-clean — unlike the mixer which we will use for the rest of the recipe! Once the bananas are ready, stir in the vanilla. Yes, I use a lot of vanilla. I could even be a vanilla-holic. I like the way it tastes.

Cream the Earth Balance (or butter, if you prefer) and sugar until the mixture is just that — creamy. I use an electric mixer but if you need the upper body workout, you could do it by hand. The key here is to allow the shortening to reach room temperature before you begin but not be too soft. You don’t want it melting on you or it will spoil your crumb.

Add the eggs — one at a time. Incorporate completely. Now comes the tricky part. You will be alternating the banana mixture and the Bisquick (though you can sub the dry ingredients in my layer cake recipe if you don’t like Bisquick). You want to end on dry ingredients and you must not over beat at this point. Once the flo

ur goes in, you risk a tough cupcake if you over beat. I wish someone had told me years ago to use the paddle attachment instead of the whisk-looking one on my mixer. Now I’m telling you.

Pour your smoothly beaten batter to half fill the muffin cups and bake about 20 minutes or until a toothpick comes out clean to the center of the center muffin. Cool completely before attempting to frost — let alone adding googly eyes (edible ones). We made a cream cheese frosting and you can find my vegan cream cheese frosting recipe here. I’m ashamed to admit that I was out of Earth Balance so I threw a stick of regular butter in the blender, dumped a whole bunch of powdered sugar in and a dollop of cream cheese and beat it till it looked like frosting. That’s not a recipe but it does work. Frosting makes itself. This recipe yields two dozen cupcakes. 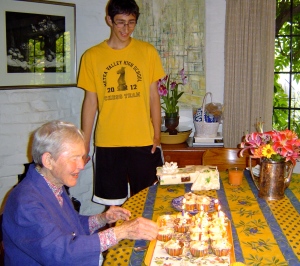 9 Responses to Characters and Cupcakes