Tuna and Sweet on a Spud

Posted on December 2, 2012 by bakingnotwriting

I was at a small sandwich shop in London once years ago and noticed that one of the fillings on offer was “tuna and sweet.” The man behind the counter was annoyed when I asked what that was. Apparently, tuna and sweet corn is a favorite combination there while pretty much unheard of over here. They even put tuna and sweet on what they call “jacket potatoes” — what we just call baked potatoes.

Potatoes in the UK aren’t the potatoes you’re used to. The flesh, rather than being a neutral backdrop for sour cream and butter, actually tastes delicious all by itself. That’s true of most European potatoes (or at least the ones I have eaten) which is part of the reason the French fries in Belgium, Britain, and France taste so much better than anything we can fry domestically. 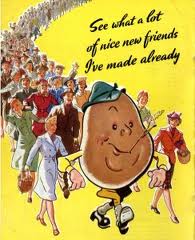 I love that you can get a huge baked potato as a fast food item over there, topped with something as nice as tuna and corn. Jacket potatoes are available everyplace, even the touristy, mostly lousy ones. I remember England when the food was scary bad (I have a cast iron stomach but hurled after eating a Wimpy Burger — those were in the bad old Mad Cow days though). Nowadays, even Wimpy offers a jacket potato.

I have started making tuna and sweet-topped spuds at home for a quick hot dinner when a tuna sandwich sounds like a lonely, sad evening meal for an adult. The proper recipes for this dish require you to bake the potato and then slice it in half and dig out the inside, which you then combine with your tuna and mayo before re-stuffing the spud. I’ve never been able to effectively do this, so I go for more of a glorified potato skin assembly, dumping the tuna and corn combo on top of a halved potato.

Before I made this dish, I would never have imagined that you could bake mayonnaise. We are all taught to fear hot mayo at a picnic, right? Of course spoiled and hot are not the same thing,  and I have noticed ads lately for chicken that has been rolled in mayo and bread crumbs before being baked or fried. I wonder how that tastes and if it’s better than an egg wash for coating poultry? I’m going to try it one of these days and let you know. 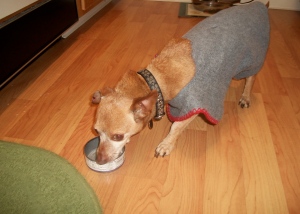 Be sure to clean your tuna cans before recycling

Wash and puncture your potato or potatoes and bake for 40 minutes or until the flesh is easily pierced and tender. Cut in half lengthwise and place in a shallow, oven-safe dish. 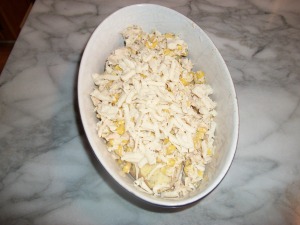 Return to the oven and broil or bake at a high heat until cheese (or vegan substitute) is bubbling and starting to brown. Serve with a green salad — like they do at Wimpy!

I'm a writer who is always baking! Or a baker who is always writing...No. Other way around.
View all posts by bakingnotwriting →
This entry was posted in British food, Lactose-free, Potatoes and tagged baked potato, British potatoes, jacket potatoes, sweet corn, tuna, Wimpy Burger. Bookmark the permalink.

3 Responses to Tuna and Sweet on a Spud