So yes, it’s lactose-free, but I went heavy on the bacon. I was trying to recreate the taste of a conch chowder I once had (and let’s be honest — I had a lot of coconut milk left over from Trader Joe’s — turns out I don’t love it in my coffee unless there’s sugar). 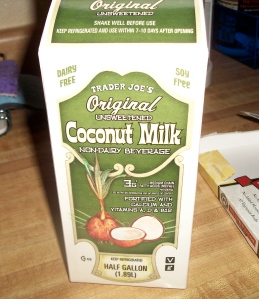 If I make it again, I will use a dash of fish sauce (from an Asian grocery) and lemon grass or lime leaves.  Not that it was bad. It was pretty good. You don’t miss the dairy-based milk at all in this recipe. Let’s face it: It’s hard to miss anything when you are using Niman bacon. I was shocked, by the way, that there weren’t any photos online of the Niman bacon that were any better than this one. I ate the bacon too quickly to photograph it! Oops.

4 cups of coconut milk (unsweetened)
1/2 pound of bacon
A medium yellow onion
A couple of stalks of celery (include the leaves if they are nice)
Two cans of chopped clams (keep the liquid)
2 tablespoons flour
2 tablespoons Earth Balance
1/2 pound of potatoes chopped bite-sized
The juice of a lime
Thyme, tarragon, paprika, hot pepper, salt and pepper to taste

Fry up your bacon in a big skillet. Keep the grease. You are using it.

While the bacon is frying, chop the vegetables. I have been using over-sized LA-style sunglasses, by the way, instead of onion goggles, and they work great!

Melt the Earth Balance in another pot (I used my big-ass Le Creuset, see photo at the top of this post) and whisk in flour. Add coconut milk and whisk till smooth. Add herbs and spices, including lime juice. As I mentioned above, lemon grass would be a great addition here.

Did someone say bacon soup?

Blot your bacon and break into pieces. Full disclosure: I ate most of the bacon. Some of it made it into the soup though.

Add clams to broth and use bacon grease to saute the vegetables, starting with the onions and adding the potatoes last.

Make sure the onions and celery are soft and translucent, but the potatoes only need a taste of the grease. Let them absorb it and then dump the veg into the soup. Cook at least 40 minutes on a low heat, until the potatoes are tender. Garnish with whatever pieces of bacon you were able not to eat.

This would work beautifully without bacon too, of course. Just saute in Earth Balance instead to make the recipe vegan. 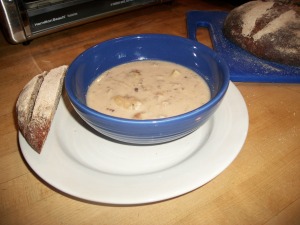 I'm a writer who is always baking! Or a baker who is always writing...No. Other way around.
View all posts by bakingnotwriting →
This entry was posted in Dairy-free, Lactose-free, Potatoes, Soup and tagged coconut clam chowder, coconut milk, dairy-free clam chowder. Bookmark the permalink.