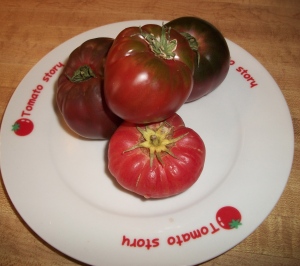 I swear that I read somewhere (the New York Times? It’s the only thing I read besides the New Yorker and TV Guide) that carrots used to be purple when they were first discovered and that orange was the novelty color that caught on unexpectedly. Now I can’t find any traces of that fun fact in the NYT online so I might have imagined it, but I still snapped up a bunch of purple carrots on sale at my local organic market.

Our weather has been unseasonably cold and the heirloom tomatoes at said market were tasteless (related? Probably) so in to a soup they went, along with some zucchini (which should be free — it’s such a weed), purple onions, and a mess of barley which had been soaking overnight. Half a bottle of good red wine (old) and a bottle of beer turned the whole thing into a delicious flannel soup. I seem to remember flannel hash was with beets but those purple carrots are bright enough to dye your clothes with and they have the same effect. The recipe is below, if you can call it that. I never make soup the same way twice. My only hard and fast rule is that I sauté the veg some first before I add my liquid. Otherwise, the rules are: No rules. Toss in whatever you like, add enough liquid to more than cover it, and cook very low at least one day. It will be better the next day.

Chop and wash your veg. In the case of the carrots, I had to wash them twice — even after peeling. They were very sandy. Heat the olive oil a large, heavy  pot that is big enough to accommodate several cups of soup. Add your veg, starting with the carrots and onions ending with the garlic and tomatoes so that the garlic doesn’t burn. Once everything is starting to soften, deglaze with wine and add tomato paste. At this stage, I cooked the wine down for about 20 minutes and then removed some soup to use for sauce in a lasagna, but that is a tangent.

Add beer, barley (drained), soup cube, Worcestershire, and spices, ripping bay leaf in half before adding. Cook this mixture till just before it boils and then reduce and cook very low for about an hour or until it reduces to where you want it. I ate it with a healthy dollop of Green Valley organics lactose-free plain yogurt. Don’t forget to fish the bay leaf out before eating.

I love this lactose-free yogurt! So excited it exists.

The guy who wrote the recipe I eyeballed on Allrecipes.com was called Beaker. Wasn’t he a Muppet also? Not that there’s anything wrong with that. The Swedish chef is a Muppet.

I'm a writer who is always baking! Or a baker who is always writing...No. Other way around.
View all posts by bakingnotwriting →
This entry was posted in Dairy-free, Diner food, Gluten-free, Lactose-free, Soup, Vegan and tagged barley soup, Green Valley lactose-free yogurt, Telma mushroom seasoning, vegetable soup, worcestershire sauce. Bookmark the permalink.