Posted on April 21, 2011 by bakingnotwriting 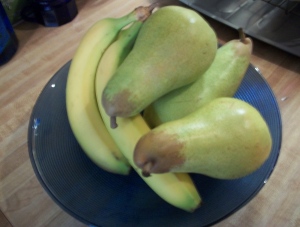 There’s nothing local about either of these fruits — I think the pears are from Peru and nobody grows bananas in this hemisphere, but I have recently visited the Chicago Institute of Art and I was in the mood for “still life with fruit.” Doesn’t that sound nicer than the French version, “nature morte”? Death is always unappetizing.

Though speaking of meat, Chicago always puts me in a meat and potatoes mood. I decided to confect a shepherd’s pie (also known as “cottage” pie) for Wichita Sims. This Southern writer of my acquaintance pens tales filled with guns and trucks and outdoorsy angst. The humble shepherd’s pie is a good fit for her because it’s all about being delicious and rich without the frou frou and fuss.

This a dish my Mom made for us infrequently, probably because with my Dad around, the mashed potatoes never lasted long enough to top off the burger base. I looked up some recipes on line, though, just to be thorough, and was shocked to see that many of them included frozen vegetables in the main part of the pie with the meat. They called for cooking the frozen veg first, then with the meat, and then baking. That would reduce the vegetables to mush, but maybe that’s the point? This pie is a pub food which means English peasant food and they also like mushy peas. My rendition is the California version. If you want a more authentic version of a mash pie, go here and read what Delia Smith’s site has to say. Cheese, butter and creme fraiche. Don’t I wish! 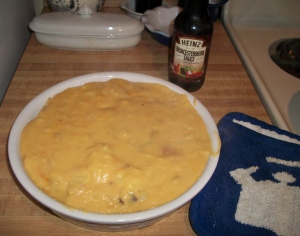 4 – 6 largish potatoes (I used Yukon Gold because they taste buttery all by themselves)
1/2 cup unsweetened coconut milk or other “safe” milk (I love that expression — no idea if I’m using it correctly!)
4 tablespoons Earth Balance
Salt and white pepper to taste
10 – 12 oz. dairy-free cheese, grated (I used cheddar flavor Vegan Rella)
1/2 pound ground beef (I used ground sirloin) or veggie beef substitute
4 cups (before cooking) chopped crimini mushrooms (optional)
1 tablespoon of olive oil to cook the mushrooms if your beef is too lean like mine!
A dash of Worcestershire sauce for sweetness
I also seasoned the beef with:
– Onion salt
-Garlic powder
-Oregano
-Dried parsley

Boil your potatoes (cut them into chunks first if you’re smart) until they are soft enough to mash. While they are draining in the sink, melt the Earth Balance in the pot you used to boil the potatoes and heat the milk along with it. Put the drained potatoes into the hot milk mixture and mash till smooth. Add 2/3s of your grated fake cheese and melt it completely while mixing. Add salt and pepper. Set aside.

Cook the burger almost all the way, mashing it flat as you cook with a wooden spoon or other heat-safe implement. When it’s almost done, add the mushrooms or other chopped fresh vegetable (anything would work here — cabbage, squash, you name it!). At this point I had to add olive oil because my meat was so lean. Many, many recipes will tell you to pour off the excess fat from the meat at this stage but I wasn’t so lucky. Depending on how firm you like your veg, cook on. I like my vegetables to have some integrity, so I stopped cooking the mushrooms when they were wilted but not yet cooked completely. Add seasonings to taste and melt a few ounces of the remaining vegan cheese in the beef mixture. NOTE: There’s no point in reserving any cheese for the top unless you are using real cheese, in which case go for it! It’s a nice touch but vegan cheese won’t melt that way and you can go here to see what I mean.

Put the beef in a pie or casserole dish (either 8 or 9 inches around but make sure it’s shallow). Top with potato mixture and smooth it so it covers evenly.

Bake about 20 – 30 minutes until bubbling and brown. Serve with a salad to balance. 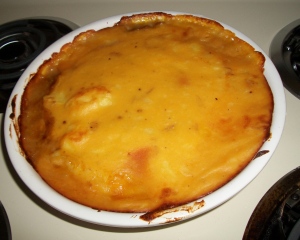